Have a look at this painting called The Persistance of Memory by the famous surrealist Salvador Dali. How does it capture you? Does it even draw your attention at all? 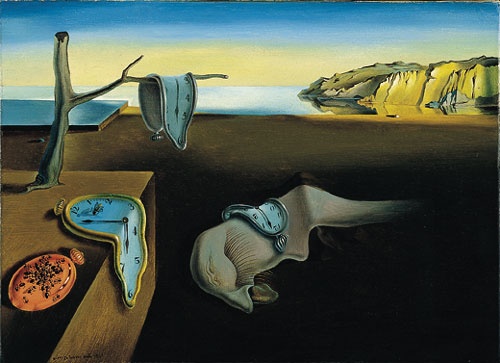 Many people find this painting captivating and definitive of the surrealistic movement in art. Here you have something familiar and distinctive – a clock. Clocks of this sort are usually found hanging on walls; yet here one is melting whilst hanging from the branch of a dead tree. Taking something out of context and superimposing it into an artificial environment is one aspect of surrealism. Even though it is sometimes said that 'a picture is worth a thousand words', this concept in relation to application of the Varnasrama culture in modern times is what I want to focus on in this article.

To help us to understand the four different divisions of varna Srila Prabhupada gave us the analogy of a human body. He likened the head of the body to the brahmanical or intellectual class of people. The arms of the body are compared to the ksatriya or administrative/warrior type of person. Just as arms can be used to activate, enforce and defend – the ksatriya class dutifully protects and administrates social injunctions under the guidance of the intellectual class. The vaisyas are like the stomach of the body. Those in this merchantile order are expected to generate an economy based on agriculture and are also expected to protect cows. The sudras are considered to be the legs of the body rendering their service by performing labour in support of the other social divisions.

Thus all four social divisions function as a whole just as the different parts of the body comprise a singular entity. So, despite that the four varnas are considered divisions of human society, they are inseperable and inter-dependent. To try to take the head, for instance, without the stomach renders a useless body. This is called ardha-kukkuṭī-nyāya, "the logic of half a hen" wherein one is impressed by the egg laying capacity of one part of the chicken but not so enthusiastic about the head which requires to be fed – so the logic is to chop off the head to remove the unwanted part .

Acknowledging the correlation between the four varnas, the question then arises "Does the existence of one particular class of people depend upon the existence of the other three?" The answer is plainly, "No". A head is a head just like a brahmana is a brahmana like a clock is a clock. Obviously an individual with distinctive intellectual capacity is who he/she is. Division, therefore, of a group of people into different classes of society solely according to their innate qualities and abilities is feasible.

"Do the activities of one particular social order depend upon the activites of the other three?" This is an entirely different question altogether. Previously we questioned whether or not a brahmana could exist without the other types of people. Why not? "Can, though, a brahmana perform his function without the other social orders?" Not sustainably. This is largely due to performing their function out of context – just like the clocks in the image above. We can say – brahmana – but if the brahmana's activities are not beneficial what to speak of in consideration of the complete social body then this definition falls into the realm of the surreal.

"According to the three modes of material nature and the work associated with them, the four divisions of human society are created by Me. And although I am the creator of this system, you should know that I am yet the nondoer, being unchangeable. " (Bhagavad-gita 4.13)

From this verse Krishna not only identifies that He personally has created these four social orders, He also describes that the divisions are based on two things:

So as far as gunas are concerned, that has already been discussed. Action, or karma, is the consideration when we discuss the implementation of something. Since we have already divided the people in society into four social orders according to their innate capacities, now we need to assign them work. "How will they fill their day?"

When all this is all working in line with Vedic injunctions then we have a reflection of Krishna's culture in Goloka Vrindavana. What makes it a gradually spirutually uplifting experience is that the focus of the whole society is pleasing Krishna.

Krishna loves cows. When He appears on Earth He chooses to spend His youth engaged in vaisya activites – foremost of which is the protection of cows.

So when we as devotees in ISKCON discuss implementation of varnasrama then we should consider the above statement and the depth of wisdom from which it is articulated. Again, for emphasis, "These two living creatures, the brāhmaṇas and the cows, must be given all protection—that is real advancement of civilization."

Besides that – Srila Prabhupada made varnasrama easy for us: "Do you like a particular activity?" "Are you good at it?" Then do it for Krishna. Simple. Be yourself and make a contribution – but try to understand the greater importance of looking after cows and intellectuals as this is essential for advancement of human society. Without this focus then we will collectively move towards a very surrealistic, unsustainable and distorted reflection of varnasrama-dharma.