US Presidential Candidate Kerry Receives Bhagavad-gita As It Is

During a recent trip to Southwest Florida to survey hurricane damage, US Presidential candidate Senator John F. Kerry met with Krsna Prema dasi on The tarmac along side the Kerry/Edwards campaign jet at Southwest International Airport in Fort Myers, Florida. Krsna Prema and her husband Bala das drove in the Senator’s motorcade on a trip to talk to victims of Hurricane Charley. 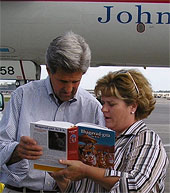 Krsna Prema dasi gave Senator Kerry a reprint of the original copy of Srila Prabhupada’s Bhagavad Gita As It Is and read to him from the famous passage In Chapter 3 Verse 21, “Whatever action is performed by a great man, common men follow in his footsteps. And whatever standards he sets by exemplary acts, all of the world pursues.” Bhagavad Gita is accepted by 1 billion people about 1/6th of humanity.

Senator Kerry listened intently, holding the sacred book, following along as she read. He said, ” That is very good. I like this.” Krsna Prema dasi explained that President Carter had also received an exact copy of this book and quoted this passage during a speech. She told Mr Kerry that he was considered a great man and this book would be very helpful to him as a leader.

Senator Kerry gladly received the gift and thanked Krsna Prema. He took it With him as he flew off to his next campaign engagement in his bid for the White House.