LA ‘abuse priests’ were moved on …

I wonder what correlation exists between institutional religion and sexually predatory behaviour? Is it just that finding filth within organized religious structures makes for a sensational story or is there actually a tendency for those with socially unacceptable carnal tendencies to take shelter within institutions? If so, then what factors contribute to this? 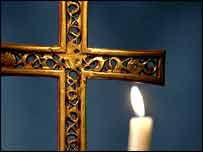 The Catholic church has already paid out millions in abuse claims
Catholic Church records in Los Angeles show that for decades priests accused of child sex abuse were moved to new assignments or given counselling.

The Los Angeles area has 126 clergymen accused of sexual misconduct in cases which have yet to come to trial.

The Catholic archdiocese of Los Angeles is the largest in the US, serving more than three million Catholics.

More than 500 alleged victims have now filed a civil suit against the archdiocese.

The personnel records of the clergymen accused have just been released as part of settlement talks with lawyers in the case.

They show that for more than 70 years, the Church provided therapy to clergymen accused of abusing children, believing that they could be rehabilitated.

The Church then assigned the priests to new parishes, which often resulted in them re-offending.

One priest, who eventually confessed to having molested as many as 10 victims over 20 years, was only removed from the priesthood after several unsuccessful attempts at therapy.

If a civil settlement is reached with the plaintiffs in this case, it is likely to dwarf a settlement reached two years ago in the US city of Boston, when the Church paid $85m to settle claims also involving about 500 members of the clergy.